Nocturne is a story of three young adults in a city where only heartfelt music can purify all the maddening noise the radio creates. It’s a story about dealing with insecurities and facing your fears while fighting twisted musical monsters along with your bandmates.

Fred Cassar is a comic artist and illustrator from sunny Rio de Janeiro, Brazil. Being amazingly bad at soccer since his early years, Fred had no choice but to focus on webcomics. He is also obviously bitter for not having a cool band at his late teens. You can find him on twitter and tumblr.

Hey, It's a comic centered around music, right? In order to make the tunes you see the characters playing in the comic, as well as the ones that are mysteriously played in the background, Fred gets musical help from two very dear and very patient friends. You can check out their work below:

Leo Perantoni is a very chill guy. From Rio de Janeiro, he works with sound design and implementation for video games. Leo enjoys eating, sleeping, taking cute pictures of his cat and playing with weird time signatures. You can reach Leo at leoperantoni.sd@gmail.com, and check out more of his work here: Website And here: When I don't Cook

Vinícius Kleinsorgen is and orchestral music enthusiast who usually works composing and producing music for videogames and animation. He enjoys studying japanese and likes maining low tiers in Super Smash Bros just to make life even harder than it already is. You can reach Vinícius at viniciuskps@novastrike.com and check out more of his work here: Soundcloud 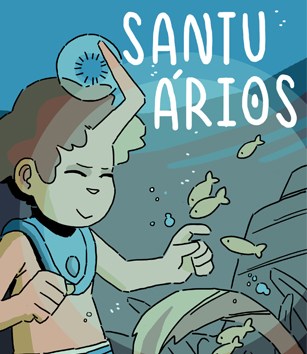